What Is Samadhi? — According To Swami Vivekananda

Samadhi (Sanskrit: समाधि) is an intense concentrated state of mind achieved through meditation. In Hindu Raja Yoga this is regarded as the final stage.1 Samadhi is a very important part or idea of Hinduism, Vedanta, Buddhism and Jainism.

In this website we are preparing to create a series of articles on Swami Vivekananda's quotes and comments on Samadhi. This is the first article of the series and here the topic is— definition of Samadhi, according to Swami Vivekananda.

A Hymn of Samadhi 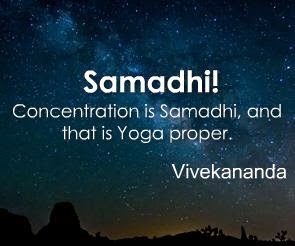 In the poem The Hymn of Samadhi (original Bengali title: নাহি সূর্য নাহি জ্যোতি) Swamiji narrated the experiences of Samadhi—


English
Lo! The sun is not, nor the comely moon,
All light extinct; in the great void of space
Floats shadow-like the image-universe.

In the void of mind involute, there floats
The fleeting universe, rises and floats,
Sinks again, ceaseless, in the current "I".

Slowly, slowly, the shadow-multitude
Entered the primal womb, and flowed ceaseless,
The only current, the "I am", "I am".

Lo! 'Tis stopped, ev'n that current flows no more,
Void merged into void — beyond speech and mind!
Whose heart understands, he verily does.

Editor's note: This is undoubtedly an excellent narration of Samadhi (Swamiji himself experienced Samadhi more than once, if time permits we'll write an article on Swamiji's Samdhi experiences). Here please concentrate on "শূন্যে শূন্য মিলাইল/Void merged into void" — it seems impossible to think something like "void merged into view". First, it is very difficult to think about absolute void. We may think about a large empty room or sky, but that is not absolute void, and then this first void gets merged into a second void — this might be the experience of Samadhi.