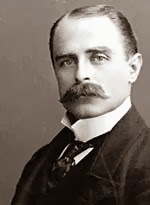 Francis Younghusband or Francis Edward Younghusband (31 May 1863 – 31 July 1942) was a British Army officer, explorer, and a writer. He discussed Indian religions, culture, Indian mystics in several books. A detailed biography of Younghusband is available at Wikipedia.

In this article we'll collect Francis Younghusband's quotes and comments on Swami Vivekananda.


On the death of Ramakrishna the leadership of the little group of disciples fell to Vivekananda, still only twenty-three years of age. Though busy with his own domestic affairs he set to work to fulfil the sacred task left him by Ramakrishna. Disregarding their vacillations he would spend hours in describing the soul-stirring experiences of the Master. And after a time they set out all over India preaching the message of Ramakrishna. They left their dearest. They suffered the agonies that all saints have to endure. And Vivekananda went further still. He went to Europe and America. He became [famous] all over the world. But always he attributed every good he had or did to what his Master, Ramakrishna, had imparted to him.

This page was last updated on: 23 February 2014, 8:43 am IST (UTC+5:30 hours)
Number of revisions in this page: 1
Categories: Notable people on Swami Vivekananda